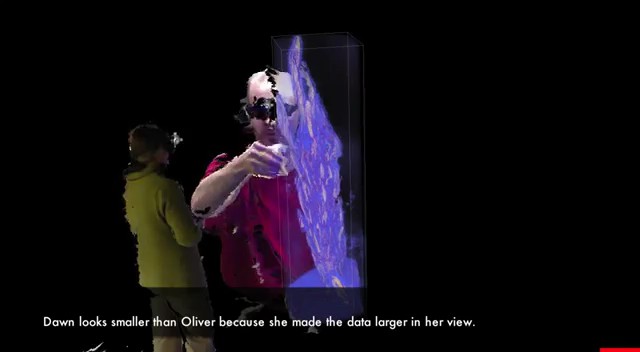 The KeckCAVES is an up-close responsive environment for massive 3D raw data exploration for scientists at UC Davis. It is based on open software (VRUI, designed by Oliver Kreylos) that is platform neutral. It works across laptops, VR-headsets like VIVEs, and multiscreen projections. It has responsive interaction properties that are intuitive about scaling, multi-person interaction, and data manipulation not found in almost any other VR implementation. It also does the 3D math differently.

We are exploring the ability to take its capabilities as basis for two-person interactive improvisational experiences using VRUI with VIVEs. More soon! Below are videos available through Kreylos’ youtube channel.

here are some more videos showing features of the KeckCAVES

hacking Kinects to allow remote collaboration with the data as central

The project at the KeckCAVES in collaboration with Jim Crutchfield, and the Complexity Science Lab. And there should be better visuals of the programs he’s been working on that allow you to really explore Lorenz Attractors and other systemshttp://artscilab.com/ASL/Spatial.html